Krud Kutter is a powerful household cleaner that promises to eliminate and inhibit rust. It is water-based, non-toxic, and SOC-compliant. What’s more, it’s backed by the slogans, “Tough on Krud, Gentle on Nature,” and “The Must for Rust!”

We tested Krud Kutter Rust Remover so that you don’t have to! Read about our findings in the sections below. We were eager to get our hands on a bottle of Krud Kutter, to see if this non-toxic cleaner was truly a “Must for Rust.” The product comes in 8- and 32-ounce spray bottles as well as pourable jugs. Our choice was the largest available bottle.

At first glance, we didn’t notice anything noteworthy about Krud Kutter. It comes in an opaque white plastic spray bottle with a label that is peppered with big promises, including a claim that it can protect the bare metal for up to 12 months. On the back of the bottle, there are ingredient lists, warnings, and use and disposal directions.

The cleaning solution is a light green liquid. It does not have a smell. According to the manufacturer, a gallon of the solution covers anywhere from 200 to 300 feet.

To start, we set out to find out whether or not Krud Kutter was capable of dissolving rust and oxidation on contact. According to the manufacturer, Krud Kutter contains three chemicals, including phosphoric acid, ethylene glycol monobutyl ether, and chromium trioxide. We knew that phosphoric acid was capable of eating away corroded metal, but no two formulas are alike.

Before testing Krud Kutter, we cut a piece of rusty sheet metal into dozens of 2-inch squares. Then, we filled several glass mason jars with Krud Kutter and submerged a piece of rusty metal in each. We wanted to see how well Krud Kutter performed at different increments of time. Our goal was to check the progress of the cleaning product at 5 -minute, 1-hour, and 24-hour increments.

When we removed the metal that had been soaking for 5 minutes, we noticed that most of the rust was gone. Before entering its Krud Kutter bath, the metal had been covered in dull orange splotches. However, it was now grey and metallic. There was no film nor discolouration on the material.

As to be expected, the pieces that had soaked for an hour and 24 hours were respectively cleaner. The Krud Kutter had held to its promise of dissolving rust on contact. The pieces of sheet metal looked as though they had been wiped clean. However, we had not taken so much as a scrub brush to their surfaces.

While we were satisfied with the results of our test, we didn’t stop there. Krud Kutter promises that it prepares metal for painting, welding, plating, lubricating, and more. Before testings out these claims, we soaked our sheet metal pieces in Krud Kutter for 24 hours. Then, we wiped them down with a moist towel and allowed them to dry.

Then, we painted, welded, plated, and lubricated. The treated metal adapted well to nearly every treatment. You wouldn’t know the difference between the treated and traditional metal.

Since our initial tests had been limited to one type of metal, our next goal was to perform some spot tests with Krud Kutter. We used it on the metal seat of an old ride-on lawnmower, some metal gutters, and a rusty boat. We are happy to announce that the rust came off within minutes of each application.

Also, we’ve tested out Krud Kutter’s capacity to removing lime, calcium, and hard water stains from porcelain surfaces in our bathroom. We discovered that“The Must for Rust” is also a solid household cleaner. We recommend using a little elbow grease to work Krud Kutter into porous surfaces. Once the solution is activated, clean water can be used to rinse it away.

At just under fifty dollars for a 32-ounce bottle, Krust Kutter is a little pricier. Still, it’s worth every penny to remove unsightly rust stains and stop ongoing oxidation. We were able to eradicate tiny rust spots from our bathtub while helping our neighbour clean rust off the trunk of his antique car. Still, there was plenty of juice left in the bottle. When you think about the long-term damage done by rust, Krud Kutter is an asset you want on your side!

Krud Kutter works on all types of metal, including aluminium, chrome, galvanized metal, and steel. It can also be used on porcelain, glass, fibreglass, and other non-metal surfaces. However, it should never be applied to marble. Marble is a soft stone that is etched easily.

Krud Kutter should only be applied to clean surfaces. Always remove dirt, oil, and grease before applying the cleaning solution.

We love that Krust Kutter is environmentally friendly. This effective cleaner is certified biodegradable and non-toxic. Instead of utilizing dangerous chemicals, Krust Kutter uses dilated acid to eat away at oxidation. The acid is made up of white crystals that bond to the surface of the metal. These crystals remain on the surface of the metal, offering extended protection. Fortunately, the chemical reaction does not produce gasses or odours of any sort. The metal can be heated, painted, and bent without risking harm to the person performing the task.

How Does it Compare?

We found that Krust Kutter was far more effective than homemade cleaners. It outperformed Coca Cola and white vinegar. What’s more, it was on the cheaper end of the spectrum compared to other rust removal products. On top of that, it could be used for messes other than rust and oxidation.

How to Use Krud Kutter Rust Remover

Krud Kutter makes rust removal an effortless process. Not only does it remove rust in one step, but it also prevents rust from developing on bare metal. One application provides up to 12 months of protection. Making things more convenient, Krud Kutter can be applied in several ways. You can brush, roll, or even spray it onto the surface of rusty metal. If an object is small enough, you can even dip it into a container of Krud Kutter for rapid results.

Krud Kutter can be used to remove rust and oxidation from iron and steel surfaces. Spray, rub or soak the rusty object in Krud Kutter. If you opt to soak the item, use a glass, plastic, or stainless steel container to contain the cleaning solution.

Allow 30 minutes for the phosphoric acid to eat away at the oxidation. If any rust remains, consider applying another application of Krud Kutter. When you are happy with the results, use a clean, moist rag to wipe down the surface of the metal. Wait 30 minutes before painting.

The process for using Krud Kutter on aluminum and chrome is almost the same a that for iron and steel. However, you must apply the cleaning solution to a wet surface.

Krud Kutter also has a few unconventional uses. For one, the manufacturer recommends using it as a bathroom, shower, and toilet cleaner. Phosphoric removes calcium, lime, and hard water stains from porcelain, tile, fiberglass, and glass.

When cleaning your bathroom, spray Krud Kutter directly onto a surface and allow it to sit for 5 minutes. Use a cleaning brush to work the chemicals into the surface. Then, use water or a wet rag to rinse away the stains. A second application may be necessary for stubborn stains.

Krud Kutter can also be used to remove oxides and rust from automatic cooling systems. Pour some solution into the system and allow it to circulate for some time. After that, eliminate the Krust Kutter and flush the system with clean water. Finally, replace the water with coolant.

While the manufacturer attests that phosphoric is safe for people, animals, and plants, this mildly corrosive chemical can irritate skin and eyes. We recommend wearing gloves when handling Krust Kutter. If you accidentally come in contact with the solution, use water to rinse it away. As always, store Krust Kutter out of reach from people and animals.

We’ve gathered the most helpful tips and tricks from successful Krud Kutter consumers.

Test in an Inconspicuous Area

While phosphoric acid is only mildly corrosive, it can leave dark blotches and discolorations on aged metal. As such, we recommend testing the solution in an inconspicuous area before spreading all over an antique.

Wait for Temperatures to Heat Up

Krud Kutter doesn’t perform well on surfaces that are cooler than 75 degrees. As such, we recommend pulling objects indoors on blistery days. If you are looking to prepare a large outdoor metal surface, you may need to wait till spring.

Use as a Rust Inhibitor

Don’t wait for rust to appear before putting Krust Kutter to use! This impressive solution can be applied to bare metal. It will protect bare metal from oxidation for up to 12 months. If you have a metal object or surface that needs protecting, Krust Kutter is a solid preventative option.

Use as a Painting Prep

Use a 50/50 mixture of Krud Kutter and water to prep the surface of the metal that you wish to paint. Make sure to wipe the surface dry before applying paint.

Krud Kutter is a rust removal product that claims to be able to remove rust from metal surfaces in just minutes. We decided to put this product to the test to see if it could really live up to its promises.

We started by testing Krud Kutter on a small piece of rusted metal. We let the product sit on the metal for the recommended amount of time, and then we wiped it off with a cloth. To our surprise, the rust was completely gone!

Is Krud Kutter safe on metal?

Krud Kutter is safe to use on most metal surfaces. However, we would recommend that you test the product on a small area first to make sure that it does not damage the surface.

Which rust remover is best?

There are a lot of different rust removal products on the market, and it can be hard to know which one to choose. We recommend Krud Kutter because it is effective and safe to use.

Is Krud Kutter a rust converter?

No, Krud Kutter is not a rust converter. It is a rust removal product that will remove rust from metal surfaces.

Overall, we were highly satisfied with Krud Kutter Rust Remover. This non-toxic cleaner was anything but labor-intensive. More importantly, it presented us with amazing results. We simply soaked or sprayed rusty metal objects with Krud Kutter and waited for the oxidation to disappear. In almost all of our test applications, rust stains and signs of oxidation were gone within minutes. While we weren’t able to test Krud Kutter’s 12-month extended protection, there are plenty of online reviews that attest to the cleaner’s long-lasting coverage. For just under $12 a bottle, this specialty cleaner can’t be beaten.

Since it doubles as a bathroom and automatic cooling system cleaner, there are plenty of ways to use up leftover contents. Given the frequency and determination of rust, we suggest that all home and business owners keep a bottle on hand! Let us know what you think about Krud Kutter in the comment section below. 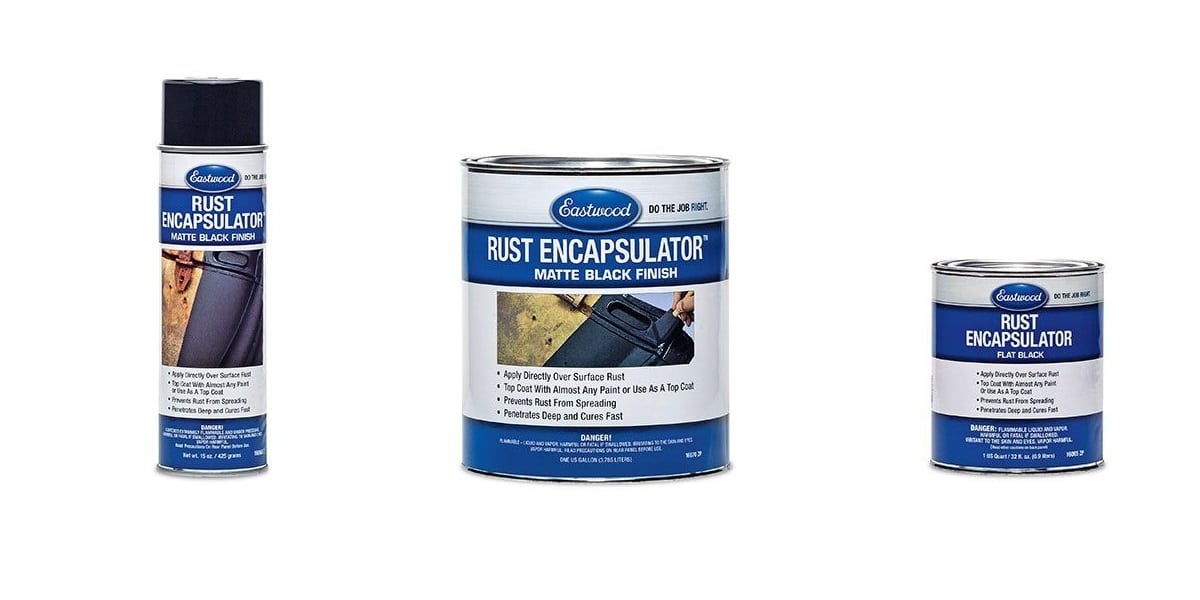